Marvel at the ancient treasures of Greece on this enchanting tour of classic Greece. Witness 2,500 years of history at the mighty Acropolis in Athens. Visit ancient Olympia, the birthplace and site of the ancient Olympic games and travel through the picturesque countryside to the lovely town of Kalambaka. Continue with an unforgettable journey through Greece’s classical and medieval past, discovering the incredible rock monasteries of Meteora and stunning archaeological ruins of Delphi, Epidaurus and Mycenae. 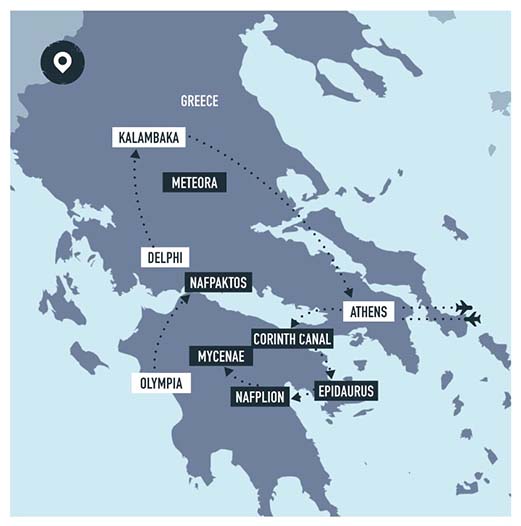 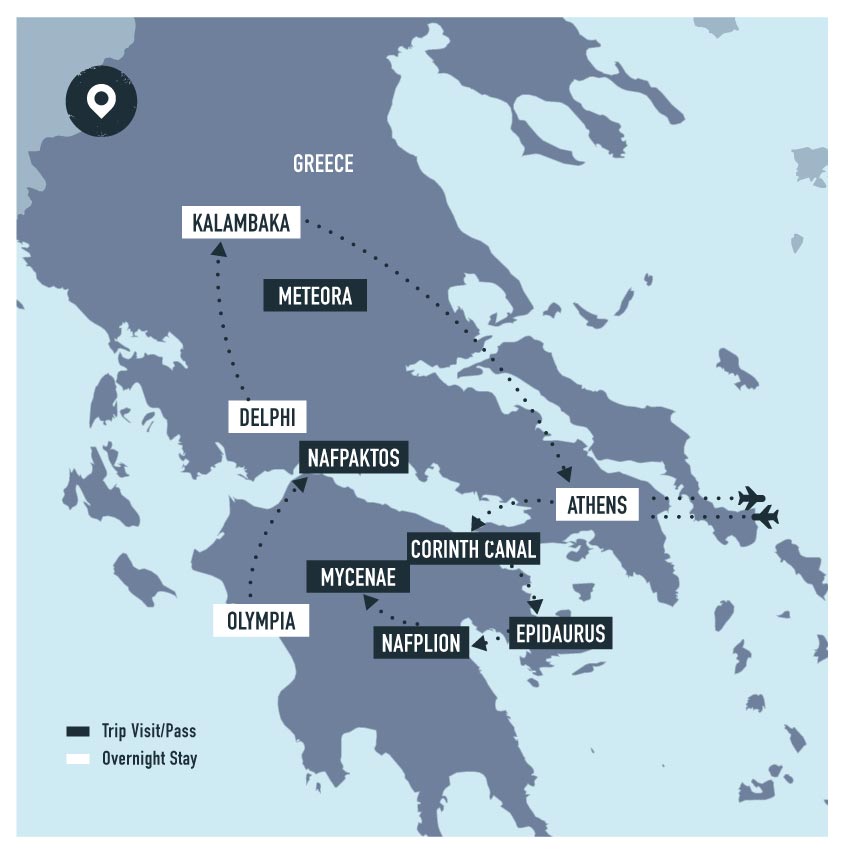 Depart the US on your international flight to Athens, the capital of Greece.

On arrival at Athens International Airport, meet your Peony Tours’ representative and transfer to your hotel. After checking in, enjoy the rest of the day relaxing at the hotel or start discovering the history-steeped Greek capital independently. Perhaps roam the cobbled lanes of the old districts.

Today, set off on a comprehensive sightseeing tour of Greece’s capital. With a 3,500-year history, this captivating city blends bustling plazas and cobbled lanes with classical antiquities dating to the 5th century BC, as well as landmarks left by the Roman, Venetians, and Ottomans. Your explorations begin with a tour of the modern and ancient highlights, including Constitution Square and Parliament House, the Memorial to the Unknown Soldier, and the National Library. See sites such as Hadrian’s Arch, the Temple of Zeus and the Panathenaic Stadium, the site of the first modern Olympic Games, en route to the Acropolis*: the stunning citadel that looms high over the city. Here, marvel at the masterworks of Athens’ golden age, including the sublime Parthenon, Propylaea, Temple of Athena Nike, and Erechtheion. Finally, explore the New Acropolis Museum*, a stunning contemporary home to statues and sculptures discovered at the Acropolis site. Afterwards, the afternoon is free at leisure.

After breakfast, depart Athens by the scenic coastal road and reach the Corinth Canal for a short photo stop. Enjoy the magnificent landscape in the Corinth Canal’s protected waters, one of the 19th century world’s engineering masterpieces with history that starts as early as 602 B.C. Our journey continues as we make our way to the ruins of Epidaurus*. Delve into the age-old former home of a sanctuary dedicated to Asclepius, the god of healing. Stop to view Epidaurus’ highlight: its incredible 4th-century theater, one of the greatest and best-preserved Greek theaters, and known for its incredible acoustics — it’s said that guests seated on the highest rows could hear a coin drop on the stage. Next, transfer to the seaside city of Nafplion, the first capital of modern Greece and home to a charming old town crowned by the mighty Venetian fortress of Palamidi. Later, continue to the remains of Mycenae*, a hilltop town associated with the legend of King Agamemnon who commanded the 10-year expedition against Troy, and which was considered to be the Homeric city of Atreides, which the poet described as ‘rich in gold.’ Explore the best of the ruins here, seeing such prized features as the Lion Gate, Cyclopean Walls, and the Royal Tombs. Afterwards, depart for Olympia for dinner and overnight.

After breakfast, enjoy a morning tour of Ancient Olympia*, the birthplace of the idea and site of the Ancient Olympic Games. Visit the Sanctuary of Olympian Zeus and the Archaeological Museum of Olympia, which hosts important treasures such as the famous statue of Praxiteles, Hermes. Continue through Achaia and Rio – Antirio towards Delphi, passing through the picturesque towns of Nafpaktos and Itea. Tonight, enjoy your dinner at your hotel in Delphi.

A visit to the magnificent classical site of Delphi* is one of the highlights of any tours of Greece. This morning, explore this mountainside complex, set on the slopes of Mt. Parnassus. Once considered the ‘navel of the earth,’ this ancient sanctuary has its roots in the 6th century BC, and was home to the oracle of Apollo, which issued cryptic predictions and advice to visiting leaders and pilgrims. Your explorations begin with highlights, including the Sanctuary of Apollo where the oracle, Pythia, the temple priestess, delivered her prophesies, and the beautiful Doric Treasury of the Athenians, built to house offerings to Apollo. Afterwards, visit the Delphi Museum, which houses a fascinating collection of findings from the site, including the beautiful statue of the bronze charioteer. Depart for the lovely town of Kalambaka and enjoy dinner at the hotel tonight.

This morning depart Kalambaka and travel to the UNESCO-listed rock monasteries of Meteora. Teetering high on sandstone pillars that were first settled by hermits in the 11th century, these medieval sanctuaries were largely built between the 12th and 15th centuries as inaccessible religious retreats. Visit two breathtakingly situated monasteries* to view some of the priceless icons and treasures they hold and soak up the bird’s-eye views from their jaw-droopingly high terraces. Enjoy lunch at a local restaurant in Kalambaka (not included), before returning to Athens bypassing Trikala, Lamia and Thermopylae where a stop will be made to visit the memorial of Leonidas and the brave 300 Spartans. This evening, enjoy a farewell dinner at a local restaurant with your fellow travelers.

Transfer to the airport and bid farewell to Greece as you board your return flight to the US.

TOUR MANAGER
•
Mandarin Chinese and English-speaking tour manager throughout Greece.
HOTELS
•
Deluxe 5 or 4-star hotel accommodation for your comfort.
MEALS
•
Daily hotel buffet breakfasts and 4 dinners as per the itinerary including a farewell dinner in Athens.
SIGHTSEEING
•
Half-day Athens City Tour with an English-speaking local guide, including entrance fees to Acropolis Site and New Acropolis Museum.

•
Comprehensive sightseeing tours with English-speaking local guides as indicated in the itinerary, including entrance fees for attractions in Mycenae, Epidaurus, Olympia, Delphi, and 2 Meteora Monasteries.

Airfares included in the advertised Land + Air Package prices are from Los Angeles(LAX)/New York(JFK)/Chicago O'hare(ORD)/Boston(BOS), including fuel surcharge and taxes/fees, not including any baggage fees or seat assignment fees.

Amalia Hotel Olympia is located at a unique place that combines the energy, the space and the serenity of Ancient Olympia. It is set in a green filled landscape with olive trees. From every corner of the white marbled spacious lobby, guests enjoy the endless green scenery along with the open air terrace of the lounge café. The restaurant and the large swimming pool are situated on the ground level with immediate access to the gardens, providing a relaxing holiday to all guests.

Amalia Hotel Delphi has an exquisite location at the foot of mount Parnassus.  The room balconies and the public areas of the hotel offer a panoramic view of the green valley, all the way to the sea, the town of Itea and the beautiful town of Galaxidi. All guest rooms have natural light, through windows, terraces or balconies, which are fully air-conditioned or heated depending on the season and are equipped with all necessary facilities.

Amalia Hotel Kalambaka is situated in a very beautiful setting, just minutes away from the town of Kalambaka. This beautiful scenery is completed with running waters, extensive gardens, a large swimming pool and views to the Meteora rocks. The hotel comfortable guestrooms all situated on three levels, with views to the gardens or the Meteora and Theopetra rocks.