Sail to some of Europe’s most spectacular cities and stay in Frankfurt and Budapest on this unforgettable 11-day odyssey, including a leisurely River Danube cruise. After exploring Germany’s gems of Frankfurt, Nuremberg, Regensburg, and the medieval Cesky Krumlov in the Czech Republic, embark on your river ship at Passau for six wonderful days of cruising to Budapest. Pass by lush hills, picture-perfect towns, and the vine-coated slopes of the Wachau Valley, and stop to discover imperious Melk Abbey, pretty Durnstein and the grandeur of Vienna. Then, continue into Hungary and enjoy time to explore the historic town of Esztergom before cruising to Budapest for three full days in Hungary’s magnificent capital. 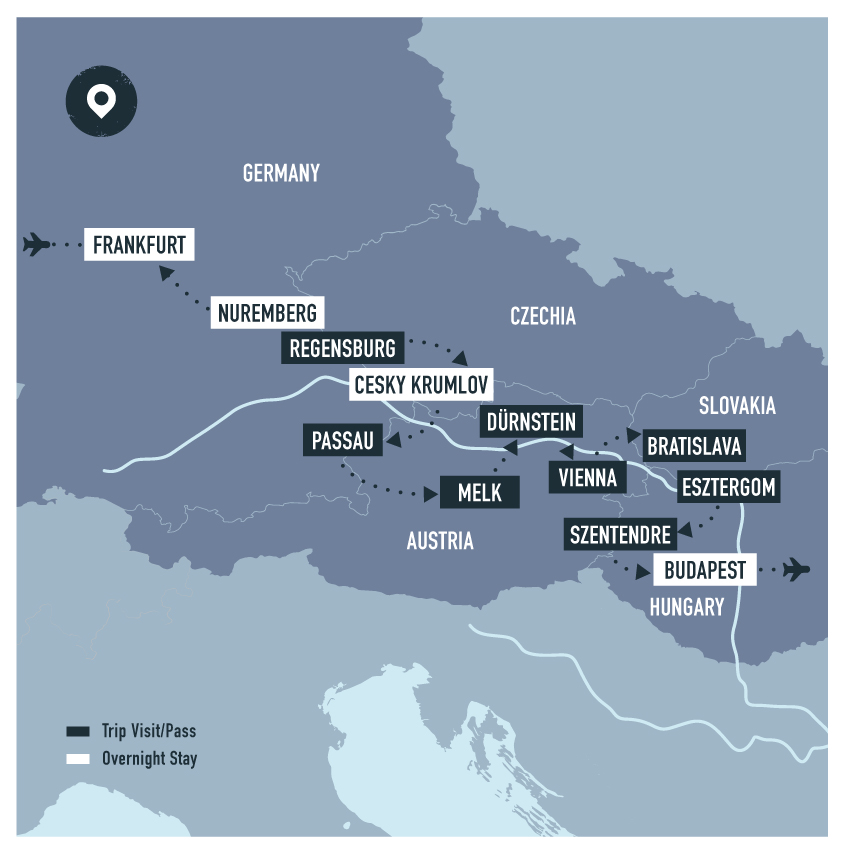 Today, catch your international flight from the US to Frankfurt, Germany’s fifth-largest city and one of the world’s leading financial centers.

On arrival at Frankfurt Airport, meet your Peony Tours representative in the arrivals hall and start our city tour of Frankfurt by coach, crossing the river Main for panoramic views of the imposing skyline, dominated by the European Central Bank, Alte Oper, the Trade Fair Centre, and main railway station. Afterward, hop out at the Paulsplatz for a walking tour of Frankfurt’s Old Quarter, seeing landmarks such as the Frankfurt Cathedral, with its Gothic tower, and the world’s largest Stock Exchange. After dinner at a local restaurant, we check in to the hotel.

Journey east to Cesky Krumlov, a picturesque Czech Republic town in south Bohemia’s Vltava River valley, stopping for free time in Regensburg en route. Cesky Krumlov enjoyed its heyday between the 13th and 15th centuries, when it was ruled by the Lords of Rosenberg. Discover its highlights on a half-day sightseeing tour, including a visit to the Castle and its Garden*. After explorations and dinner at a local restaurant, check in to hotel for overnight.

Following a hotel breakfast, set off on a transfer to Passau, a delightful German city set near the Austrian border where the River Danube meets the Rivers Inn and Ilz. Traveling southwest from Cesky Krumlov through picturesque countryside, stop en route for lunch at leisure before reaching Passau. On arrival, board your comfortable cruise ship and after settling into your cabin, meet your captain and crew for a Welcome Cocktail Reception before dinner. Later, savor dinner in the glamorous dining room with its large picture windows. Tonight, your boat will sail for Austria’s beautiful region of Engelhartszell, where the Danube winds through lush green mountains.

After breakfast, set off for Melk Abbey*. Overlooking the Danube from a rocky outcrop, this imposing Benedictine abbey has its origins in the 11th century and is a vision of Italian baroque architecture. Take a guided tour to admire its highlights, including the Marble Hall, Library, and bedchambers where many famous figures have slept, all graced with interior frescoes and gold leaf walls. Next, sail to Durnstein and enjoy free time to explore this beautiful town. Delve into the pretty streets and admire the famous blue-painted baroque church and ruined castle, where Richard the Lionheart was imprisoned in the 12th century. Later, cruise through the vine-carpeted hills of the idyllic Wachau Valley toward Austria’s capital of Vienna. Upon arrival, enjoy a panoramic guided tour of Vienna by Night*, admire the city’s famous Austro-Hungarian-era buildings, all beautifully floodlit in the gathering dusk. Drive around the Ringstrasse, the wide boulevard that encircles the old city, and admire landmarks such as the State Opera House, Hofburg Palace, City Hall, and more. Tonight, your ship stays in port.

Relax over breakfast and enjoy a morning devoted to the Schönbrunn Palace*, the one-time summer residence of the Habsburgs. Standing in spectacular gardens, this 1,441-roomed masterpiece was home to the Habsburg emperors from the 18th century to 1918 and is one of the best-preserved Baroque mansions in Europe. Enjoy a guided tour of the main rooms that reflect the former splendors of the Habsburg court, and enjoy time free to stroll through the ornamented gardens. Finally, return to central Vienna and enjoy time at leisure to explore the area around St. Stephen’s Cathedral before returning to your ship. If you wish, choose to explore Viennese culture further independently or perhaps join us for an optional horse-drawn carriage ride through the city.  Later, enjoy a festival Gala Dinner on board before cruising toward Budapest, passing Bratislava en route.

After breakfast, enjoy time at leisure to explore Esztergom, situated on the Danube Bend. Once the capital of Hungary and still the center of the country’s Catholic churches, this beautifully situated town is dominated by a vast, green-domed Basilica, sitting majestically on a hill above the river. After enjoying Esztergom, sail around the scenic Danube Bend, where the river loops and turns sharply toward Budapest, Hungary’s historic capital and one of Europe’s greatest cities. On arrival, perhaps get acquainted with Budapest independently before dinner on your ship. After dinner, admire the capital’s evening lights on a panoramic coach tour of Budapest by Night*, absorbing views over the illuminated city from Gellert Hill or the Buda Castle District, passing the floodlit Parliament building, Chain Bridge, Heroes’ Square, Fisherman’s Bastion, and other landmarks.

A full day in Budapest beckons, with the chance to immerse yourself in the ‘Pearl of the Danube’ on our tours or to explore as you please. Divided into Buda and Pest by the Danube, this captivating city blends the medieval cobbles and churches of the old Buda Castle District with the elegant boulevards of commercial Pest. Our guided Tour of Budapest* showcases both quarters, starting with the sight of the neo-Gothic Parliament from the iconic Chain Bridge. Delve into the UNESCO-listed Buda District, enjoying the dramatic views over the city from the Fisherman’s Bastion and exploring the cobbled lanes to see highlights such as Matthias Church, the coronation site of many Hungarian kings. Finally, explore Pest, viewing must-sees including the Parliament building, Heroes’ Square, Vajdahunyad Castle, St. Stephen’s Basilica, and the Szechenyi Thermal Baths, before a walk beside the Danube. If you desire, perhaps take an optional tour this afternoon, immerse yourself in the hot spring pools of the Gellert Baths and Spa (additional cost). Tonight, join us for a traditional foot-tapping Hungarian Folklore Show*, enjoying displays of regional Hungarian dance and gypsy music at a city theater.

Relax over breakfast before bidding farewell to your ship and traveling to the medieval walled town of Szentendre. Upon arrival, enjoy a city tour seeing its Margit Kovacs’ Museum* before strolling around the center and browsing the shops of local embroidery and pottery. Later, transfer to your hotel in Budapest for the final night of your vacation. This evening, sit down to a special farewell dinner with your fellow travelers.

After breakfast at your hotel, transfer to the airport for your return flight to the US.

•
Airport group transfers on arrival (Frankfurt) and departure (Budapest) included in Land+Air Packages.
CRUISE INCLUSIONS
•
5 nights’ Danube River Cruise on the 4-star vessels of CroisiEurope, the largest river cruise line in Europe.
•
Outside cabins in main deck, double occupancy with shower in private bathroom.
•
All meals on the cruise, including 5 buffet breakfasts, 4 lunches, and 5 dinners, with refined French cuisine at every meal.
•
Welcome Cocktail Reception, Gala Dinner and Evening.

•
Discover the greatest cities along the Danube and bask in the idyllic landscapes of the Wachau Valley, including 6 shore excursions in Classic Package:
•
Onboard entertainments and activities.

•
Free Wi-Fi in ship lounge and bar.
•
Headsets for hearing guide clearly on excursions, except other specified.

•
Travel assistance, repatriation insurance, and all port fees are included.

Airfares included in the advertised Land + Air Package prices are from New York(JFK), including fuel surcharge and taxes/fees, not including any baggage fees or seat assignment fees.

The originally medieval house was reconstructed in a luxurious and modern way during the year 2005. Our guests can have a gourmet experience in the well-known Grand restaurant offering brilliant Czech and international cuisine. The hotel Grand is located in the heart of the historical part of the town, listed by UNESCO. All sights are easy to reach on foot.

Located on a quiet side street next to the State Opera House, K+K Hotel Opera is a competitively priced hotel in one of Budapest’s most exclusive districts. We are a short stroll from the city’s most famous sights and embassies.