From ancient wonders to natural marvels, this guided tour will introduce you to three of China's most popular and diverse cities. Walk across Beijing's incredible Great Wall, gaze at stoic Terra-cotta warriors in Xian, peek inside the Forbidden City; visit modern attractions such as the “Bird's Nest” built for the 2008 Olympics and the “Water Cube” Aquatics Centre. In Guilin take a river cruise down the Li River and savor the stunning scenery. End the tour in vibrant Shanghai, where visitors can enjoy a walk along the famous waterfront boulevard, the Bund. This tour is perfect for travelers who want to experience the very best that China has to offer. 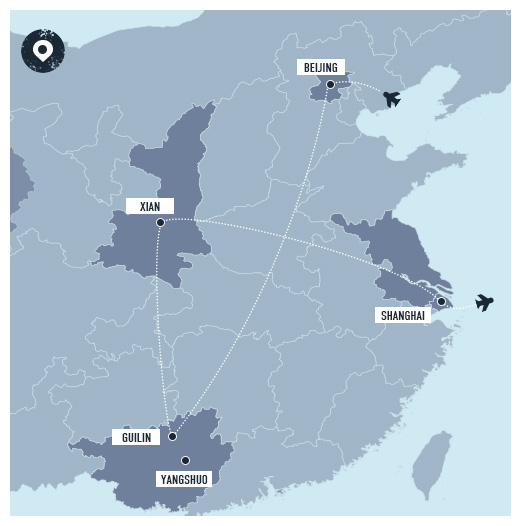 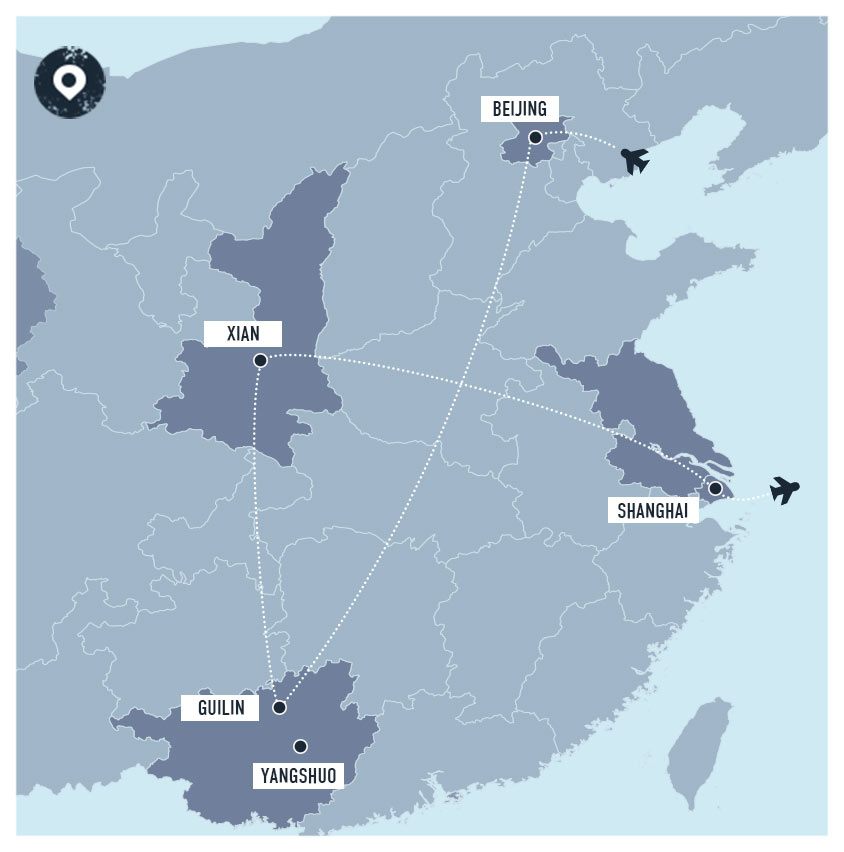 On arrival, meet your guide at Beijing airport and relax with a convenient transfer to your luxury hotel for a well deserved rest.

Today enjoy an introductory tour of Beijing, whose origins extend back 3,000 years. The seat of the Ming and Qing emperors until the early 20th century, China’s capital fuses gleaming temples with austere public monuments built by Chairman Mao. Explore Tiananmen Square*, the world’s biggest public square, and visit the Forbidden City*, the secret-steeped residence of 24 emperors. This UNESCO World Heritage site is girded by 10-meter high walls and consists of more than 8,000 rooms, all exuding imperial mystique. Later, visit the stunning UNESCO-protected Summer Palace*. Walk around this entrancing park, a vision of Chinese landscaping, to view the elaborate bridges, temples, and pagodas that flank Kunming Lake. Then we travel to the Temple of Heaven*, a fascinating complex of imperial cult buildings centered on a sacrificial altar pavilion. Constructed in the early 15th century, the temple compound was used by China’s emperors to perform animal sacrifices that they believed would secure bountiful harvests. Admire the halls and pavilions before making a stop for photos at bustling Qianmen Street*. This evening enjoys a delicious local cuisine dinner.

After breakfast at your hotel, travel to the Great Wall* or ‘Long Wall of Ten Thousand Li’ as it’s named in old Chinese. Built over 2,000 years ago to stave off nomadic invasions from the north, the gargantuan wall trails for over 5,500 miles across China like an imperial dragon. Stride along the battlements and behold the views over the mountains and valleys stretching into the distance. Cap your day with photo stops at the impressive Bird’s Nest* and Water Cube* stadiums, built for the 2008 Olympics. Tonight savor a mouthwatering Peking duck banquet* for dinner.

After breakfast, catch a short flight to Guilin, whose surrounding countryside is described by the Chinese as ‘unmatched under heaven’. Check in at your hotel and spend the evening at your leisure.

A meandering river cruise* down the Li River is a delightful way to savor the serene, fairytale scenery of Southern China. You may even catch the fascinating sight of fishermen fishing with cormorant birds. The cruise ends at Yangshuo. Disembark and enjoy wandering around the town with a visit to the ancient West Street. When the sun sets, enjoy the local cuisine, rice noodles for dinner followed by the fantastic Minority Musical Stage Performance on Li River* - “Yingxiang Liusanjie”. The show is directed by Chinese famous director Yimou Zhang. (Admission fees will be refunded if the show is canceled as a result of inclement weather).

After breakfast, travel back to Guilin by coach. Explore the Reed Flute Cave* and marvel at the otherworldly stalactite and stalagmite formations. Afterward board a domestic flight to Xi'an, home to the life-sized Terracotta Warriors and Horses, upon arrival, transfer and enjoy dinner at the hotel tonight.

Once China’s capital and the eastern terminus of the Silk Road, the vibrant city of Xian dates back 3,000 years and is best known as the home of the Terracotta Warriors. Unearthed by farmworkers in 1974, this 6,000-strong mass of carved life-size soldiers and horses represent the real army that guarded China’s first emperor, Qin Shih Huang, and were interred with his tomb in 200 BC. After viewing the ranks of warriors, neatly arranged in the battle order of the time, visit the nearby Mausoleum of Qinshihuang* and then return back to the city limits for a view of the ancient city wall. After an Imperial Dumpling Banquet dinner, enjoy a Tang Dynasty Stage Show.

Visit the Big Wild Goose Pagoda*, one of the most well preserved Buddhist temples in China. Pass by the massive Old City Wall and Bell Tower. Then board a flight to Shanghai, China's largest city.

★★★★★ The Kunlun Jing An Hotel or Similar

Our morning tour of Shanghai includes a leisure walk along Shanghai's famous waterfront boulevard, the Bund. Enjoy the dramatic skyline along the Huangpu River, then board our coach and drive through the famous shopping district, Nanjing Road. After visiting the Shanghai Museum (no audio service), the remainder of the day is free, for you to explore the city on your own.

★★★★★ The Kunlun Jing An Hotel or Similar

Following breakfast, enjoy a convenient transfer to the airport for your return flight to the US.

Fine meals as specified in itinerary including daily breakfast in hotels and local specialty cuisines:

Daily comprehensive sightseeing program as outlined in the itinerary.

A bottle of mineral water is provided on the bus every day.

•
Easy recognized luggage tag, badge, and document holder are provided for your convenience.
•

Select city packages are available for you to extend your trip before or after the tour. See City Packages for more information.

Airfares included in the advertised Land + Air Package prices are from Los Angeles(LAX)/San Francisco(SFO)/Washington, D.C.(IAD) on Air China(CA), including fuel surcharge and taxes/fees, including any baggage fees or seat assignment fees.

Hotel New Otani Chang Fu Gong, a five-star international hotel with a distinctive exterior, is located in the heart of Beijing, China. A long history of exceptional service assured by the New Otani Hotel Management of Japan, your Beijing experience begins at the moment you enter the oriental garden designed courtyard adjacent to the lobby.

Step into one of our 491 inviting guest rooms and suites, and escape the stresses of the day. Special, updated touches such as an ergonomic chair, generous work area and High Speed Internet Access—as well as our signature Sheraton Sweet Sleeper? Bed—will make you feel comfortable and relaxed.

Shanghai The Kunlun Jing An Hotel or Similar

Located in the heart of the former French Concession, the Kunlun Jing An hotel is within walking distance of many popular shanghai attractions and offers 714 well-appointed rooms and suites with magnificent sweeping views of the city. Choose from one of the 18 meeting rooms to host your Shanghai conference, meeting or wedding reception. Shanghai airports and train stations are easily accessible from the hotel. In Shanghai's business, entertainment districts.

Tour manager took care of us well. Local tours guides were very knowledgeable and also very responsive to our needs. More explanation or information of local landmarks or historical places when drive around the cities will make the tour even better.I enjoyed this tours. Great hotels and breakfasts. Lunches and dinners fair.

By May Ting Ang